We are social creatures. We need one another and draw from one another every day. Here at The Village Potters, we are an intentional creative community, dedicated to each other’s success. We have students working with clay for the first time in their lives in small classes of eight, and seriously dedicated interns in our Independent Study & Mentoring (ISM) program developing the skills and character to become full time potters. The laughter and encouragement flows freely and genuinely every day.

This laughter and encouragement is also present in the
working studios of the five Permanent Resident Potters of The Village, and is well exemplified by a collaborative effort I had with my fellow Village Potter, Lori Theriault, during the November Studio Stroll and then at our Fifth Anniversary Celebration. Truly, the collaboration was broader than just the two of us, as I often had the help of other hands as I created “Rosie”, the biggest pot I’ve made to date, over the course of 2+ days. Multiple pieces were thrown, coiled, and added on to create her magnificent form, and after a colored slip was applied, Lori took over and added her vibrational carvings to celebrate our first Five Years, and set our intentions for the future.

This caused several requests by students and interns for demonstrations on “throwing big”, so at the end of 2016 I demonstrated several techniques for throwing big pots to about 8 of the24 interns who study in our ISM program. They were present to watch and learn during one of our three monthly demonstrations. A friendly challenge was parked amongst some of them: who in this group can make the biggest pot? 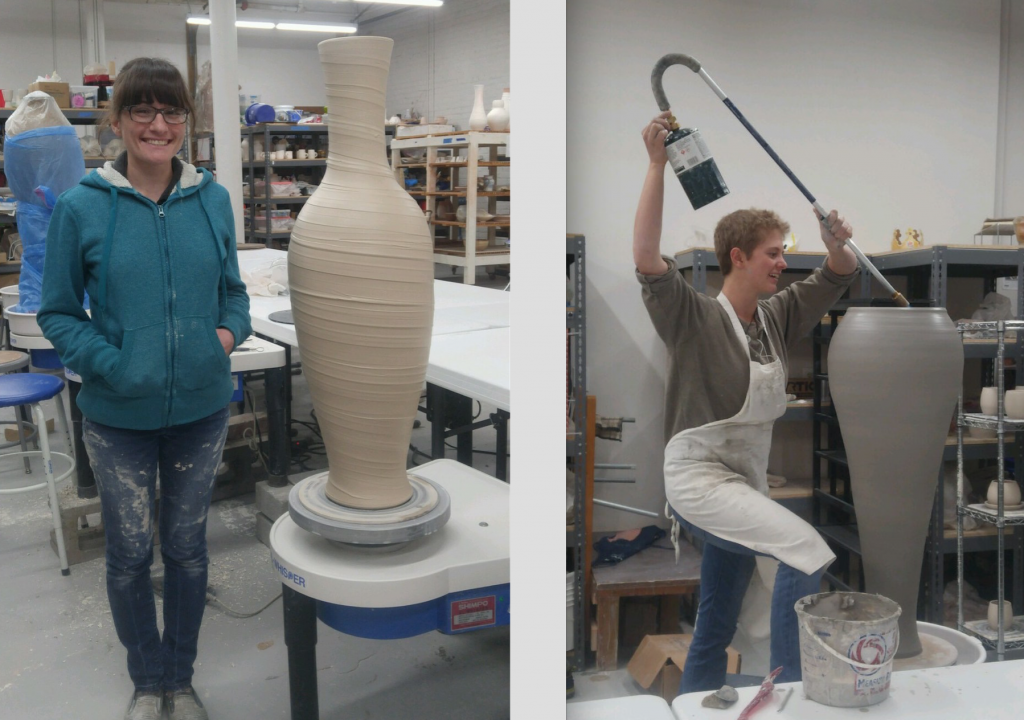 That next week and into 2017 has been so much fun watching these amazing, emerging potters who study at The Village be challenged. But what resonated louder and more freely than anything was the encouragement and affirmation for each other as they began to push the limits of clay and their skill sets. 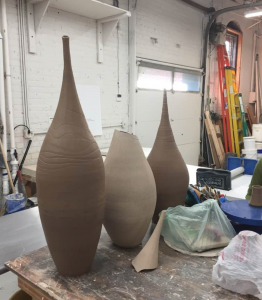 In this environment of support and encouragement, inspired potters exceeded their own vision, ideas, and goals. As a mentor and instructor, I had to remind them that their pots are limited by the size of the kilns. Who could have seen that coming so soon? Not me!

So, this weekend, February 4th I will be teaching our first Master Series Workshop of the year, “Throwing and Glazing Big.” We have over 24 people attending and I’m excited to inspire potters to begin pushing their limits, nurture them to explore form and design, and loose them to create pots they never imagined making.

Stay tuned on our Facebook and Instagram feeds as we post pictures of beautiful people and their lovely BIG pots as they grow around The Village Potters.