Last week a group of Village Potter Independent Study & Mentoring students gathered with Judi Harwood to fire pots in the raku Kiln and get to know some alternative firing techniques. We met in the morning ready to learn and experience an unpredictable day of firing. It was unseasonably warm for the end of October and almost hot at times with the blazing Raku kiln opening and closing. 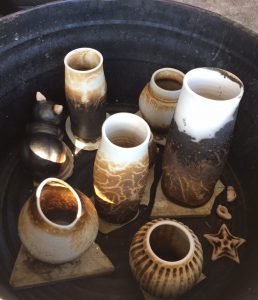 Quite a lot of work had already gone into the pieces we were firing. Each piece had been thrown and bisque fired, but the final firing was yet to come. Judi was in charge, leading us with her many years of experience, knowledge, and gifted teaching skills. On this day there were three Raku options for our bisqued pieces: copper glaze, horse hair, and obvara. Each technique is incredibly unique and creates vastly different effects. And while there are elements that we can manipulate, much of what happens to the piece is determined by variables we cannot control. One of the many reasons that Raku firing is so exhilarating.

I decided to fire my pieces using the obvara technique, while others chose horsehair and copper glazing. Obvara, sometimes called Baltic Raku, is an Eastern European firing technique originated in the Baltic region. The hot (1650 degree) piece of pottery is taken out of the kiln and quickly immersed into a fermented liquid, made with water, flour, yeast, and sugar. The surface of the pot is scalded, leaving a wonderful variation of color from creamy tans, to browns and black. As with other low temperature alternative firings obvara pieces are purely decorative and not to be used with food or water. 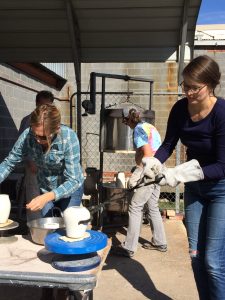 There are two opportunities during the month of November to see live Raku firings. Judi Harwood will be demonstrating the copper glaze method during the Studio Stroll on Saturday and Sunday, November 12th-13th from 11am-3pm, and then again during the 5th Anniversary Extravaganza on November 19th from 4-8pm. Come experience the excitement of raku with us!

by Dearing Davis, The Village Potters

Oh, and here is Marque Gritta testing out smoke bomb effects on his horsehair raku piece. This technique was mentioned by Joe Frank McKee when he taught a Masters Series workshop at The Village last August.