This week is “Teacher Appreciation Week”, and each of us at The Village Potters has multiple teachers to appreciate who helped us become who we are. Some are in the traditional sense of teachers we knew in school, but many continue in that role as colleagues, friends, family, and often people we barely know but who impart great lessons in brief encounters. 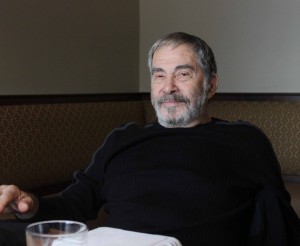 One such “teacher” among us is Village Potter Bernie Segal. He began his career as a pottery teacher to high school students in California, and continued teaching throughout his career. Even now, while the only formal ‘teaching’ he does is in fencing instruction, we continue to benefit from his experience, his wisdom, his direct and indirect tutelage to each and all of us. He demonstrates for visitors, and offers opinion, critique, and suggestion to those he deems worthy and capable of receiving. And we are quite happy, although not at all surprised, to learn that this is the way Bernie has been from the beginning!

What follows is an article written by Steve Dayton in 2006 about his experiences in the high school pottery class taught by Bernie Segal in the late 1970’s. It’s longer than our usual posts, but worth every word, so don’t skimp! This is not only a glimpse into who Bernie was – this is who Bernie IS. We’re all grateful to have found these well-written words and to know that we’re so fortunate to share in the magnificence that is, and always has been, Bernie. 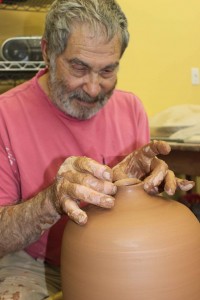 “Weekdays at Bernie’s: The Wheel and The Pooper” by Steve Dayton

… I would never dream of fibbing or fabricating anything about my most favorite-ist teacher in the entire Universe, because Bernie Segal’s story virtually writes itself. Mr. Segal was my Ceramics Teacher at Granada High School in Livermore, California, back in the late 70s. His intelligent face and penetrating eyes framed by curly, devil-couldn’t-care-less black hair resembling a dust-speckled Brillo-pad, Segal’s diminutive yet sinewy form encased a heart of pure clay: porcelain to a lucky few, Mississippi-delta mud to the majority, and just dense, unyielding stoneware to any who wandered blindly into his studio looking for an easy mark. In case you didn’t already  know, porcelain is a kaolin material that turns a beautiful, translucent white after sufficient exposure to the kiln’s electric Hellfire… white, of course, being the light that Isaac Newton proved to be a combination of ALL the colors of the rainbow. 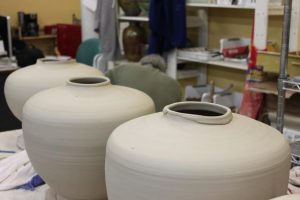 The consummate artist, Bernie Segal could throw huge clay pots that were nearly bigger than his own body, and if you’ve ever done any hard time on the pottery wheel, you will understand that I’m not implying steroid-use OR a Schwarzenegger-type strength at the “caber toss.” Strong and skillful, yes…hurling bad-guys across the room, uh.. no. His bushy black eyebrows furrowing into a mock scowl of belligerence, Mr. Segal’s sharp eyes would scan the peaceful work tables of his domain for mischief or student laziness, just before smacking down a gigantic lump of clay onto the slowly spinning metal plate that was his easel. And when I say “smack-down” I’m not using my poetic lerner’s permit here… I mean he SMACKED that malleable mud-pile vigorously and violently downward in the general direction of his rotating potter’s pizza-pan, the corners of his mouth curving upwards in a self-satisfied smirk — the only hint that he just LOVED this part of the creation process: the Bing Bang of Bernie. if his aim was shoddy that day and the clay landed off-center – wobbling pitifully like an unbalanced bicycle wheel – Segal’s smile would only grow wider, his sinewy Popeye-like forearms flexing in anticipation of the coming death struggle. 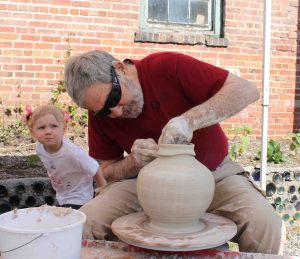 Although their full attention was rarely insisted up on, new students usually suspended their own personal struggles with dried-out doorstops, scurrilous sculptures, and lopsided bowls to watch the prolific Proust of pottery at work. I know I did … every single episode of this fascinating show for nearly four years. Along the way, Segal’s stirring lessons bestowed upon me an early fecundity for coffee cups and teapots for Mom, followed later by the skill to produce a Raku vase that won 2nd Prize in the Alameda County Fair, and finally the Fine Arts Award for Granada High seniors in 1979. These achievements and honors were SO much more about Bernie than me, and my enormous, opportunistic Ego apologizes profusely for interrupting this story with such selfish digression. (And if you believe that line of PC horse manure, I have a few ceramic doorstops glazed in a charming, sort-of-brownish color that I’d like to sell you.) 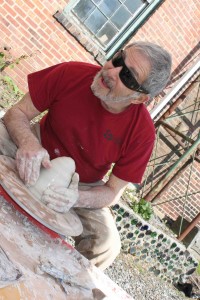 Centering a large ball of clay on the pottery wheel takes experience and patience. Bernie Segal turned this essential and difficult first step into a routine and riveting dsplay of true Macho. My “veteran” friends and I would attempt to imitate his fast and brutally-efficient centering technique fo rour entire high school careers – puberty happens, after all – but we never did match him. His right food coaxing more gas from the spring-pedal below, Segal would squeeze generous rivulets of water from a handy sponge onto the clay until it glistened with wetness, stray drops whizzing outward and pelting the yellow plastic guard rail. Attempting to center clay without adequate lubrication and high centripetal speed is amateurish folly – and Segal was no amateur. gathering his considerable Chi, the force that was Bernie applied itself to the task… his arms, shoulders, and chest muscles strained mightily for just a few seconds before suddenly releasing their grip to reveal a perfectly concentric and obedient cylinder of clay underneath. He simply manhandled it, often grunting loundly ot awaken any napping pupils he may have missed in the earlier cursory inspection. 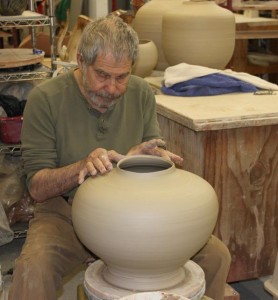 What happened next was always a mystery… the hallmark of all great artists. Sometimes the cylinder would morph quickly into a volcano and then yawn into an immense bowl shape, the simplest of forms because access to the wall is easy and centrifugal force is your friend and ally. Other times a thin-walled Tower of Pizza would emerge, only this tower never leaned under Segal’s expert and sensitive guidance. Segal’s slender, slowly-spinning tubes would nearly swallow his left arm up to the shoulder joint, and soon the tube would bloom with the elegant curves of a stunning Greek vase, amphora, or decanter. At this point, every eye in the classroom – nerd, jock, and stoner alike — was transfixed by Segal’s amazing, almost casual adroitness with this mercurial mud. Satisfied with the evolution of his offspring, he showed a surgeon’s sill with the scalpel and trimmed the long-ignored and uneven top lip to squareness, deftly flipping the resulting Mobius-strip onto the lap of a favorite student or troublemaker. Clearly pleased with his handiwork, the slip-spattered Master would step back from the wheel, our coos of admiration bringing a sly smile to his face. Many of us prayed openly that someday, somehow, we should be able to produce such beautiful artwork… 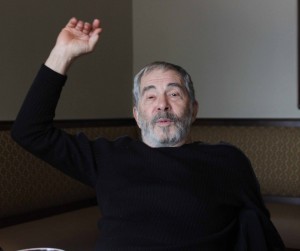 WHUMP! Freshly thrown pottery makes a very distinctive sound when struck rudely by a careless human fist. Were our eyes deceiving us, or had Mr. Segal just punched his masterpiece? We stared in wide-eyed disbelief at the now crippled vase, its once perfect form caved in like a discarded Pepsi can. Shocked silence reigned supreme in the studio, as Segal stood next to his aborted creation grinning like a psychotic child who has just skinned his first cat. “We need more fresh clay. Would someone please go start up the Pooper?” His calm voice betraying no hint of anything being amiss, Segal would use a piano wire to separate the now-wrecked renoir from the motionless steel platen. Wadding up the lifeless clay and walking nonchalantly past his murmuring students, Bernie would unceremoniously dump his handiwork straight into the depths of the “Pooper” – his nickname for the clay-recycling machine. Returning peacefully to his office, the moment his door closed we would hurry over to the scene of the crime to do post-mortems on his twisted abortions, continually amazed by the texture and thinness of the walls and the leather-like flexibility produced by a near-perfect balance of moisture, powder, and grog: the spoor of a master sculptor.
“Every act of creation is first an act of destruction.” Pablo Picasso 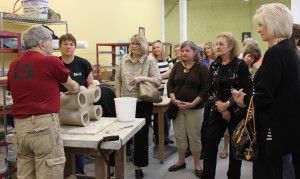 In the beginning I was very attached to my first “successess” on the potter’s wheel, and there are still shelves in my Mother’s home that bear painful witness to this now-embarrassing chutzpah. Bernie taught me to stay detached from my creations, because great art rarely – if ever – goes according to plan. Art is a process, not just a reslut, and if we attache ourselves too strongly to our works we can often stifle new growth hidden just under the surface. Iteration is very important in design… which is just a fancy way of saying that “practice makes perfect.” Some great artists believe that practice IS the only true form of art.

During my short stay at Granada, Bernie Segal’s valuable lessons fell on many deaf and distracted young ears; in their defense, I’m fully aware that some students attend art classes merely to socialize and perhaps carry off a thick-walled trinket or two. Occasionally, much to the glee of us ever-present veterans, a naive young freshman – her clothes and hair caked with the mud of her first battle — would make the mistake of asking the graying Master himself to protect and “preserve” her precious Mona Lisa on one of the classrooms few and coveted kickwheels. “I’ll come back tomorrow afternoon to finish it, OK?” Mr. Segal would reward these kinds of questions with hilarious, earnest looks of mock-concern, and as soon as the grateful co-ed frolicked happily away to her next class, the Pooper would inevitably whir into life and hungrily consume more fresh meat… an eternally grinding gristmill of artistic improvement.