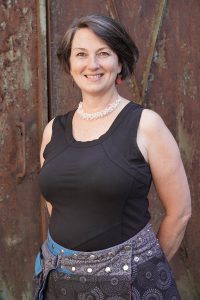 Christine is a Wisconsin native, and began her studies in clay after moving to North Carolina in 1998. She came to The Village Potters first as a student, but let it be known soon after that she wanted to become a bigger part of the Collective. After completing the Advanced Ceramics Program (Independent Study & Mentoring), she became a Resident Artist and Instructor, and enjoys teaching hand building classes. Most of Chris’ work is done by hand building, which can be a slower process than throwing on a wheel, but she loves the connection she feels with the clay. She especially enjoys the time-consuming technique of carving sgraffito into porcelain – “there is something both basic and complex about it”. She continues to share her fascination with art and nature with her husband and three young boys.

The smell of clay takes Christine back to her childhood in Wisconsin where she played in and around rivers, marshes, and lakes. She was fascinated by watching animals in their natural surroundings. She was interested in studying the small thing in nature—- the different textures of tree bark, the shape & colors of fungus, the patterns found in the forest.  Each found feather, nest, rock, fossil, or shell was (and still is) a treasure.

It is not surprising that nature is an underlying theme in her work. She attempts to draw the eye of the audience to look at things from a different perspective. To take a closer look.

Most of Christine’s work is created by hand building.  It can be a slower process, but she likes the connection she feels with the clay. She especially enjoys experimenting with texture in her beehive pieces, and carving into clay with a technique called sgraffito. When working in her studio she often feels so happily immersed, that food and time are forgotten.

Christine has enjoyed experimenting with many different art mediums over the years. She began her studies in clay after moving to North Carolina.  She has been a part of The Village Potter community for many years and enjoys her place as a Resident Artist. She enjoys teaching, and continues to share her fascination with art and nature with her husband and three young boys.  She still spends as much time outdoors as she can.